With all these discussions about gender, sometimes reaching the heights of absurdity, a little town in the black forest used this topic in order do become really known all over the world.
Triberg already claims the highest waterfall in Germany.  In 2012 they created the first two parking spaces for men. Surely it had been planned as a joke, mocking about the prejudice that women can not park properly. There has been a huge response, though, not entirely positive but creating a lot of publicity for the small town of Triberg.
After the interest and the stream of curious tourists melted a bit down, Triberg added another piece of creativity:
The silhouette of a woman in a rather lascivious position and the writings "Steep mountains and moist valleys"
More indignation and more articles in the newspaper. The town of Triberg won't be forgotten too soon, at least until there are the real news again!
Next step, the picture of the woman has been painted over again.
Let's see if there is more to come..

By the way, these are the famous waterfalls and there is the largest cuckoo's clock of the world, too. So when you are in this region, don't miss these, even if the men parking space has been removed in the meantime.

Posted by Claudia at 7:42 AM No comments:

Look what I found - how cool is that?  A dog wash center. - Our dogs have a black fur, so you don't see the dirt at once, sometimes there seems to be also a self cleaning effect to this fur which is: they are cleaner then but their ambiance not. So this is quite a good idea to clean your dog without using your bath tub, because let's be honest: it's not so much cleaning the dog itself as cleaning the bathroom afterwards, and dogs like to shake themselves before during and after the procedure..
You can use it 24/7 which is more than with the wash points for the cars - car cleaning isn't allowed on Sundays so these points are closed or won't work then. 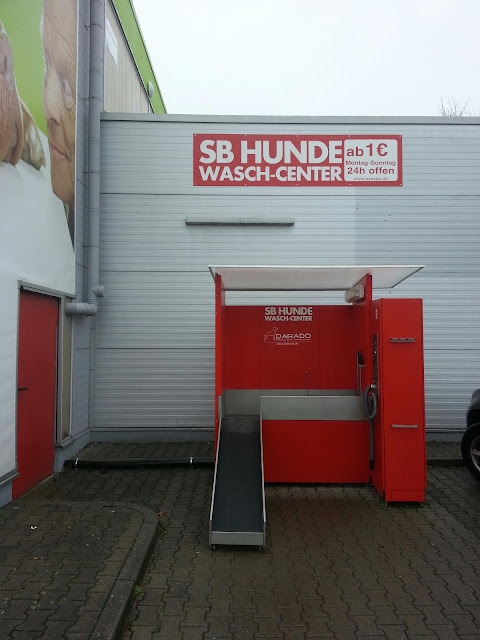 .
It follows the same system as the car wash it yourself points. 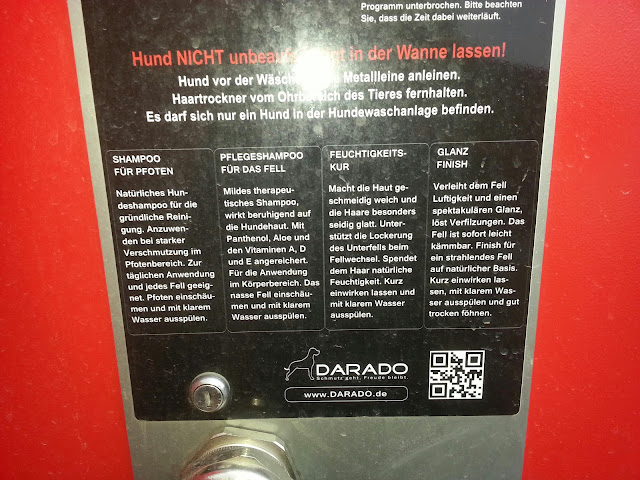 Please note that there are different kinds of shampoos for paws and fur, a conditioner and glow finish (what ever that is, maybe some kind of styling gel) and hairdryers in different levels - for the more delicate and the adventurous dogs. Since my kids like to play with the running vacuum cleaner, I presume we can go for option two.
When we tried it, I will report about it and post some pictures. 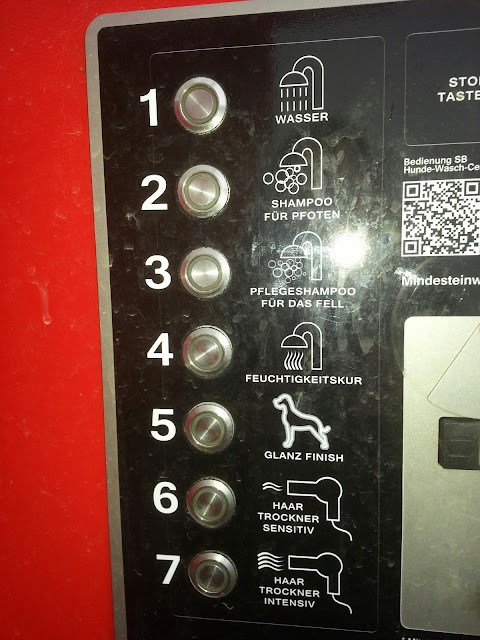 When I passed the main station going to work today, I saw the picture of "Äffle und Pferdle" again and was reminded that we have some cartoon personalities which have been known here for many decades.
So who are Äffle und Pferdle?
I remember them from my childhood and their appearances on television and they are still well-known in the Swabian area. A monkey (Äffle = small monkey) and a horse (Pferdle = small horse). Remember: the -le attached to almost anything repesents a minimization in our dialect. 'They also moved with the times, so you will find them on their website, Facebook, Youtube, as well as in old-fashioned books and lots of merchandising articles - have a look yourself and maybe you are looking for a nice and original present to bring home to your country. Have a look at the door doormat on the right, too. So what have you learned?
"Hallole" means ... ?? Next time I will tell you the story about another famous cartoon personality, Lurchi, the spotted salamander.

Trip to the fish pond 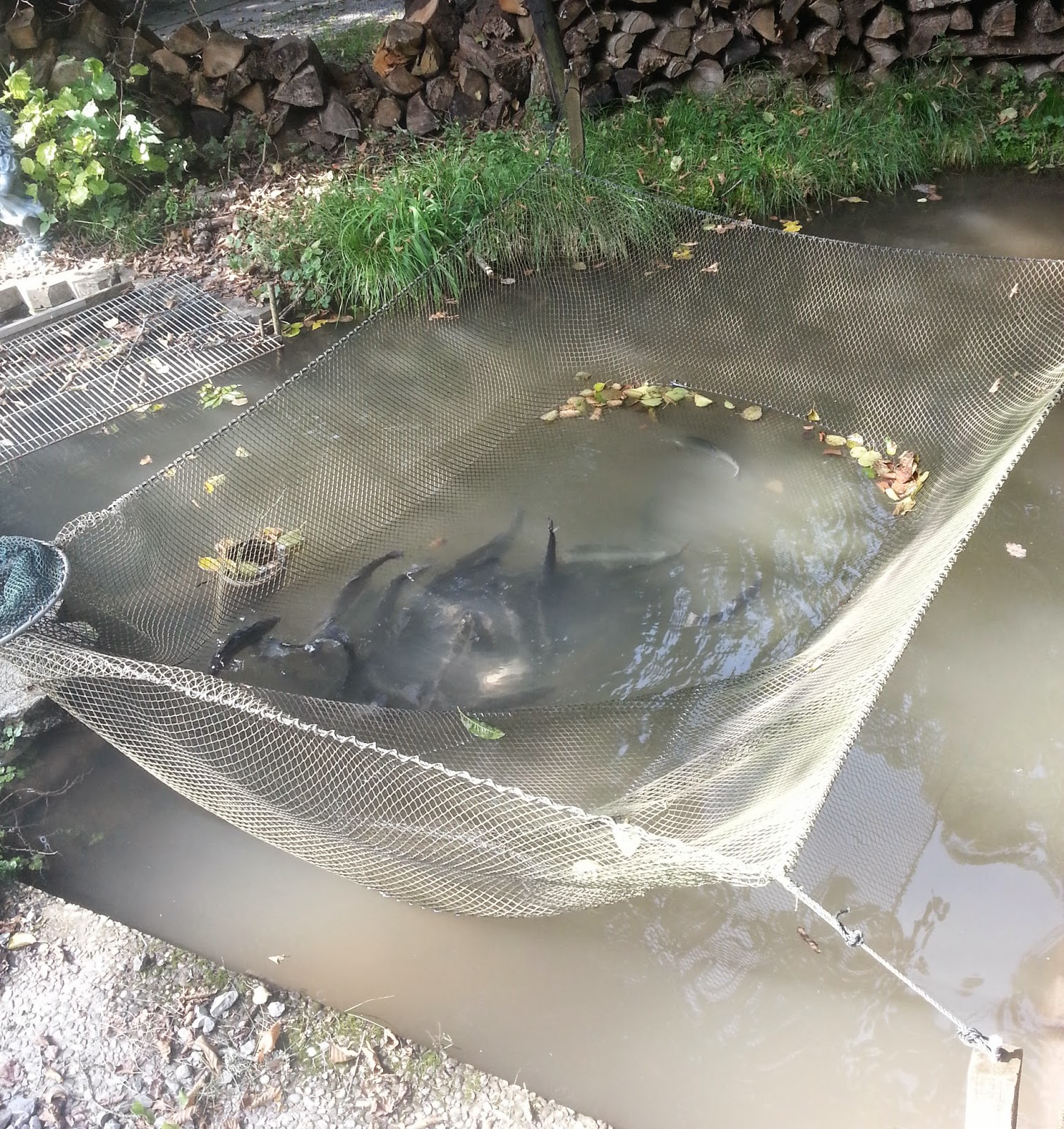 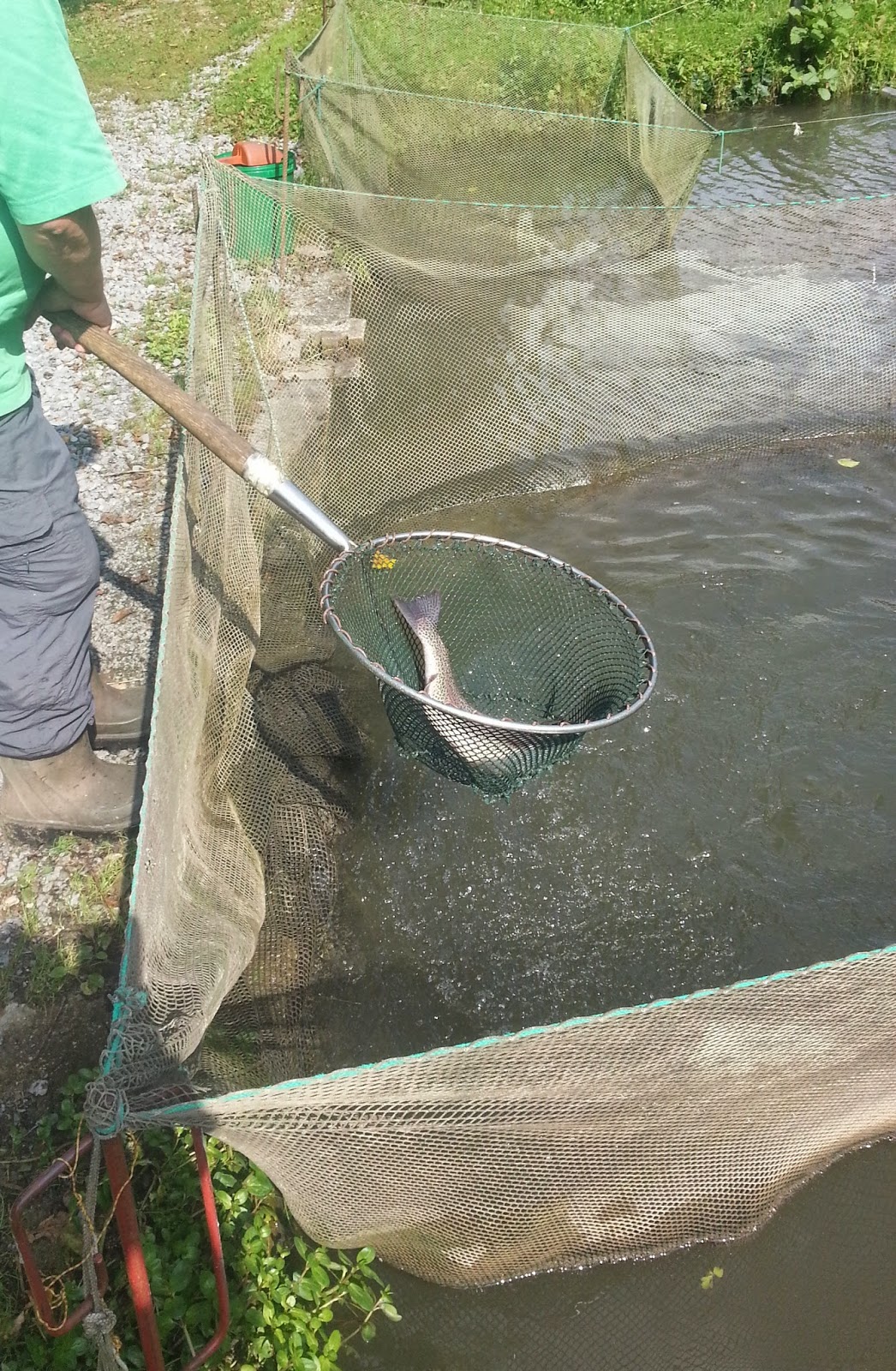 This time I recommend a hike in the Backnang Region, exactly Gronau/Prevorst. There are beautiful hike trails in the forest, trout ponds with sale of  fresh and smoked fish and the possibility for a nice rest while having a drink and regional specialities. There is a map of a hike in the Region with lots of pictures, too.
You can park your car on the lot at the "untere Ölmühle" - which means "lower oil mill", we recommend to leave it there, if you can not do otherwise you can go up by car as well to the fish breeding Ponds Fischzucht Ulrich (ask for Lachsforelle, Regenbogenforelle, Saibling/ salmon trout, rainbow trout, char)  or the upper oil mill Obere Ölmühle-
Here you will find the hike route.
It takes about 40 minutes by car from Stuttgart, taking the highway in direction of Heilbronn. In fine weather, it is really worth the side-trip and you can take yourself along some yummy fish from the Bottwar valley.
Have a good trip!

200 different types of dahlias can be admired in Höhenpark Killesberg now.
Choose your favorite dahlia, you can find a flyer and postcard on Stuttgart.de for download.
A visit to Killesberg is always a great experience. You reach it with U5 from Schloßplatz (castle square) or Hauptbahnhof (main station) or with the busses 43 starting from Rotebühlplatz and 44 starting from Hauptbahnhof.
If you take the 44 bus you will pass in the vicinity of the Chinese garden, have a break there, it is also very recommended. You will have a great view of the city. The garden is owned by Verschönerungsverein Stuttgart e.V. which is taking care of many interesting projects. Verschönerungsverein means association for embellishment and you can discover several features on their website, for example the Killesberg Turm, a trecking map and several houses in Weberstrasse which is in the old part of town, the Stuttgart Bohnenviertel.

Back to Höhenpark Killesberg:
The so-called "Green U" links several parks and green zones of the city. It is actually possible to walk nearly completely in the countryside starting at Schloßplatz and passing Schlossgarten and Rosensteinpark where you can see part of our zoo, the Wilhelma.
From May until October you can have a trip with the little train which has been running from 1939 and is now protected.
Grown-ups and kids can admire several animals on the lawn, such as sheep, ponies, donkeys and lamas.
Furthermore there are several open air events every year and the Light Festival is legendary

One of my favorite podcasts in German, always showing up with interesting links and contributions, is
Not Safe for Work. So, if your are capable of understanding German, have a try at this funny podcast with lots of information. What is it about? Difficult to say, usually it is just a mishmash of things the both podcasters had heard, read or happening to them. It might begin with a talk about the World Soccer Championship and end with a talk about stars and space, passing Berlin, Marihuana, foldable bikes, drink bottles, Sweden and German politicians. - You just never know.

The last feature mentioned some interesting things as:

Critical Mass demonstration in Berlin. It is about the impact of non motorized vehicles in traffic.
Since the German traffic law  a group of more than 15 bicycle riders are a closed entity and the law for the first of the group is applicable for the rest. That means if there is a green traffic light and the first passes, all the others pass too, even if the traffic light changes to red in the meantime. Might be that cars have to wait until the entity of 1.500 bikes have passed. Closed entities are also allowed to travel side by side while smaller groups have to go one after the other on the streets.
These Critical Mass demonstrations have been startet in San Francisco but there are regular meetings all over the world, now. Since it is an informal reunion, there is no leader and nobody who is actually responsible, the demonstrations are not subject to authorization.
Here is a link for the regular meetings in Stuttgart, the next one is on the first of August 2014.

Tim talked about somebody who took up a Sikorsky helicopter and made videos of the Berlin wall shortly after the fall of the wall. After that it had been disintegrated very fast and there are only a few remnants now.

Other Berlin features were the East Side Gallery, the world's longest Open Air Gallery,
the Gleisdreieck Park and the residues of German Highways of the "Transitstrecke" between East and West Germany.

Soccer - we are World Champions

Since everybody is talking about it, I have to put something in about Soccer.
I am lazy today, so I copy part of this from my other, Giant Schnauzer Blog

That was during the Brasi-Germany game: 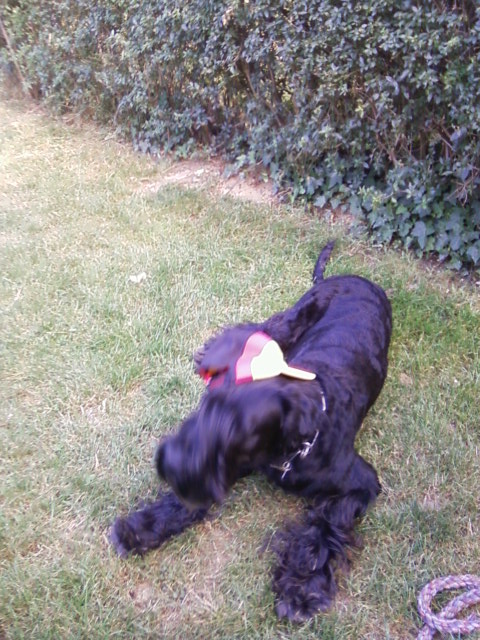 I have to put on this cap, seems that we are winning.

Haven't understood who takes part in the game apart from Germany. 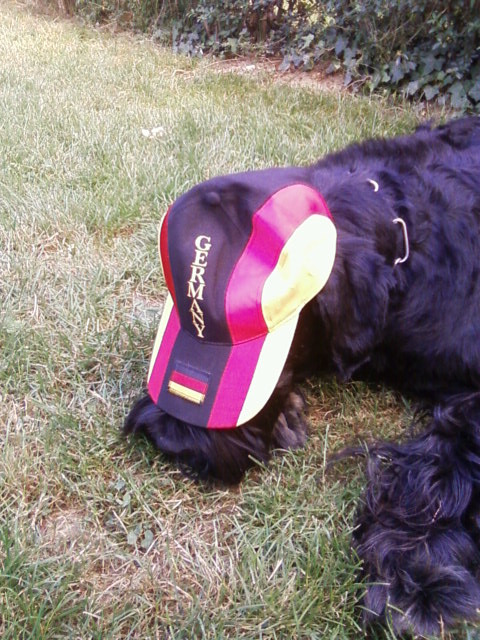 Seems they are only hitting one goal in this game. 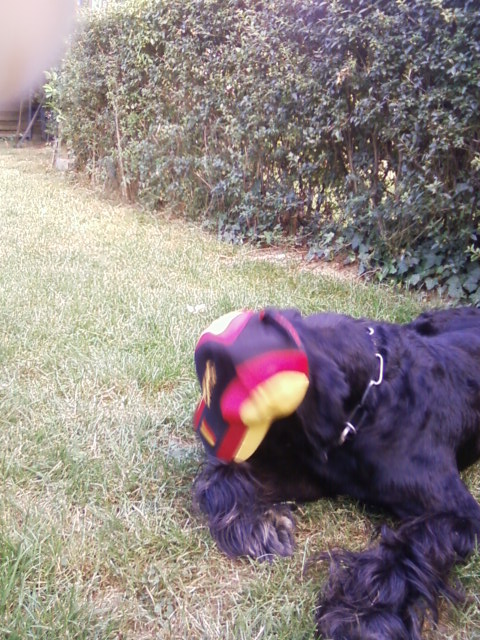 I think, we Germans won't be popular with this abroad. 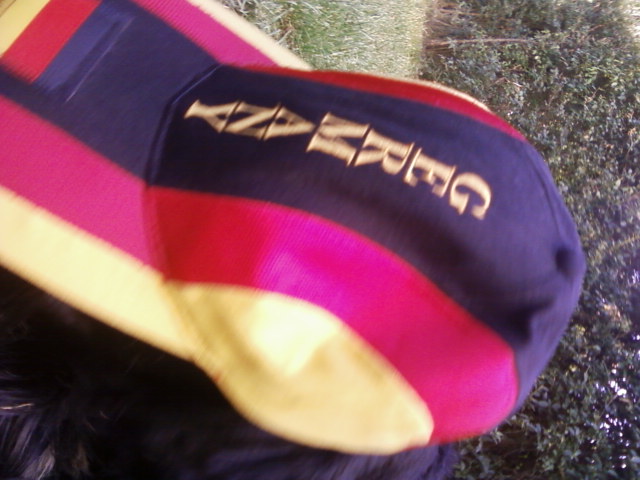 Every time my human calls me I think they are showing the goal again and it is already the next. I am confused. 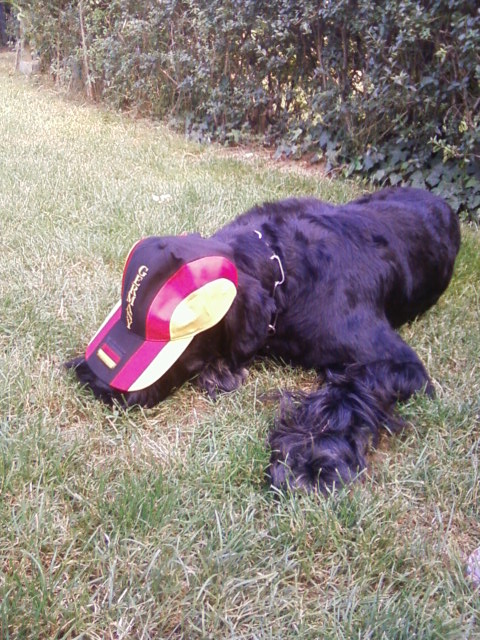 I recommend the brasilian players to go home already, so they won't get into the crowd. 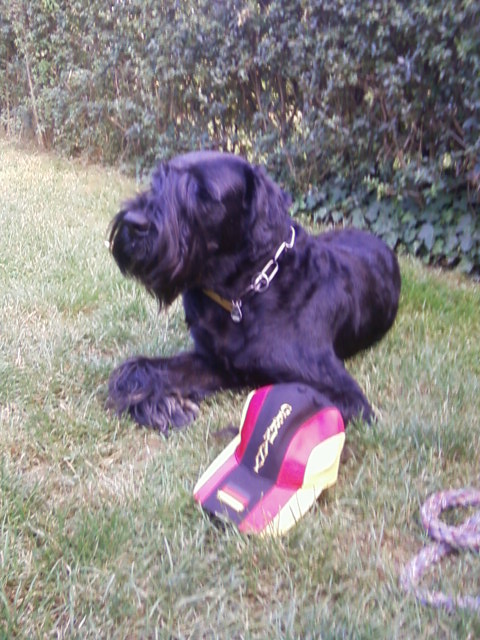 .
As German Beer Schnauzer I am of course content how the German team played.

Right now there is a live stream about the return of the Champions, everybody in Berlin waiting to greet them and have a great party.
http://www.zdf.de/ZDFmediathek/kanaluebersicht/857392#/beitrag/livevideo/2197168/LIVE:-Heimkehr-der-Weltmeister

Funny, when I was passing a screen they said that the fans have to wait two hours more because there was a collision of the "Fanhansa" with a baggage car.

Honey from happy bees in our garden 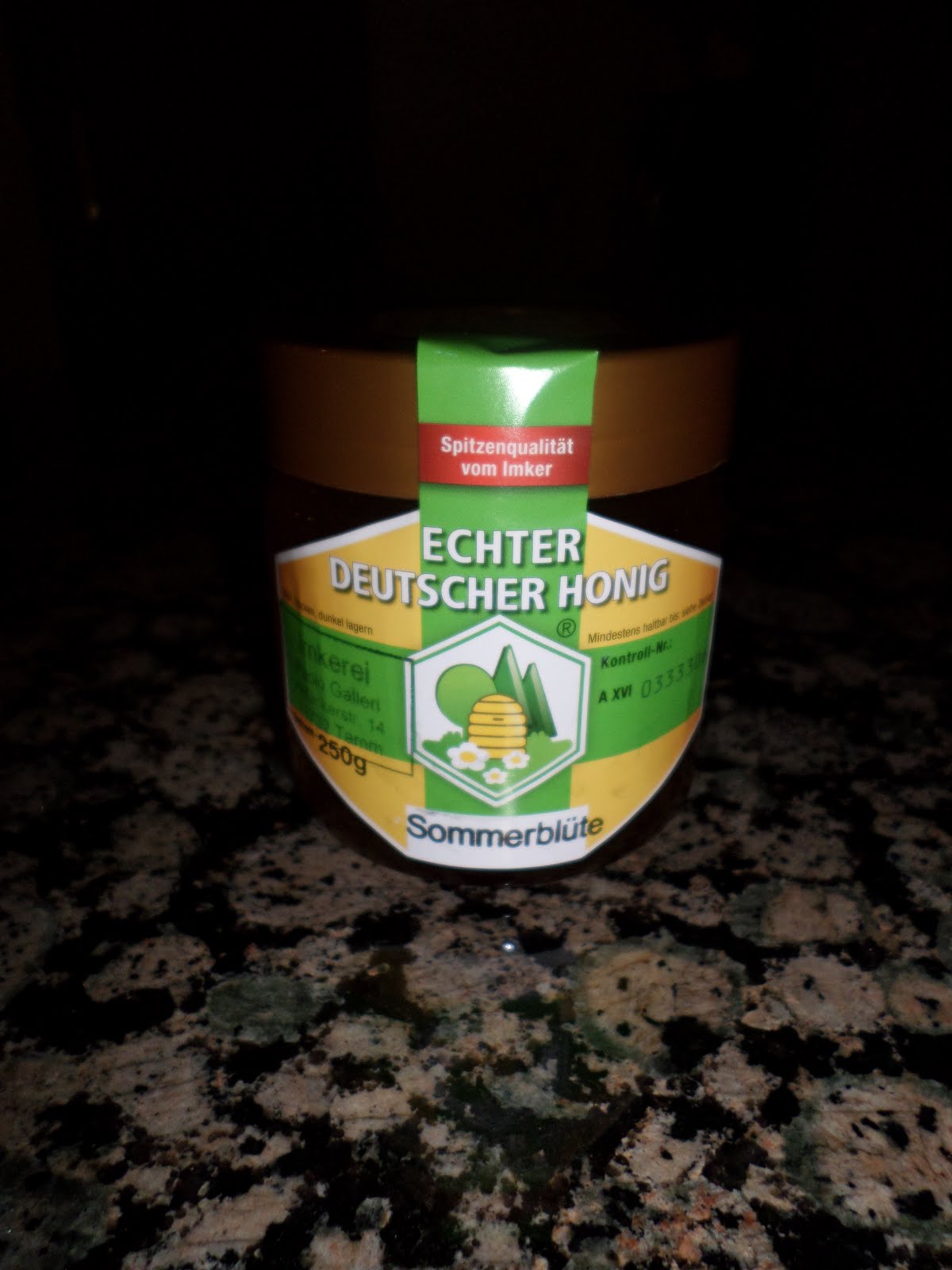 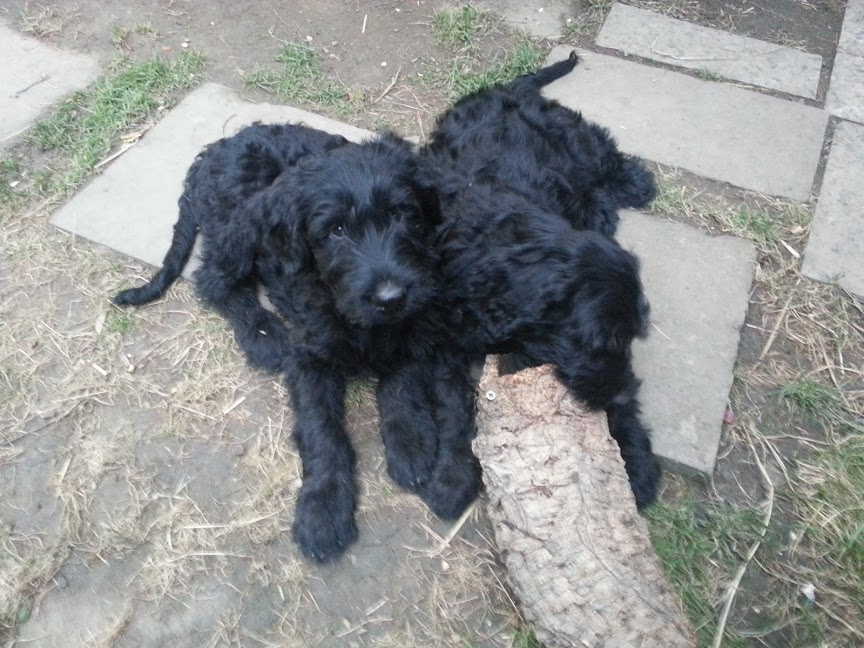 Visit this link for more information